Greek Orthodox Church of the Assumption

The Dormition of the Theotokos 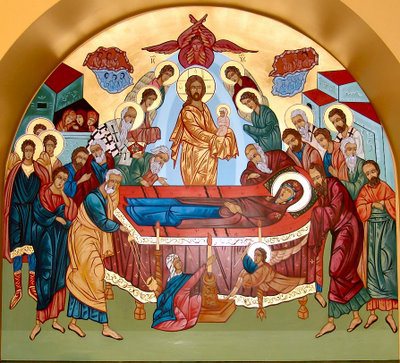 The feast of the Dormition or Falling-asleep of the Theotokos is celebrated on the fifteenth of August, preceded by a two-week fast. This feast, which is also sometimes called the Assumption, commemorates the death, resurrection and glorification of Christ’s mother. It proclaims that Mary has been “assumed” by God into the heavenly kingdom of Christ in the fullness of her spiritual and bodily existence.

As with the nativity of the Virgin and the feast of her entrance to the temple, there are no biblical or historical sources for this feast. The Tradition of the Church is that Mary died as all people die, not “voluntarily” as her Son, but by the necessity of her mortal human nature which is indivisibly bound up with the corruption of this world.

The Orthodox Church teaches that Mary is without personal sins. In the Gospel of the feast, however, in the liturgical services and in the Dormition icon, the Church proclaims as well that Mary truly needed to be saved by Christ as all human persons are saved from the trials, sufferings and death of this world; and that having truly died, she was raised up by her Son as the Mother of Life and participates already in the eternal life of paradise which is prepared and promised to all who “hear the word of God and keep it.” (Luke 11:27-28)

In giving birth, you preserved your virginity. In failing asleep you did not forsake the world, O Theotokos. You were translated to life, O Mother of Life, and by your prayers, you deliver our souls from death. (Troparion)

Neither the tomb, nor death, could hold the Theotokos, who is constant in prayer and our firm hope in her intercessions. For being the Mother of Life, she was translated to life, by the One who dwelt in her virginal womb. (Kontakion)

The services of the feast repeat the main theme, that the Mother of Life has “passed over into the heavenly joy, into the divine gladness and unending delight” of the Kingdom of her Son. (Vesper verse) The Old Testament readings, as well as the gospel readings for the Vigil and the Divine Liturgy, are exactly the same as those for the feast of the Virgin’s nativity and her entrance into the Temple. Thus, at the Vigil we again hear Mary say: “My soul magnifies the Lord and my Spirit rejoices in God my Saviour.” (Luke 1:47) At the Divine Liturgy we hear the letter to the Philippians where St. Paul speaks of the self-emptying of Christ who condescends to human servitude and ignoble death in order to be “highly exalted” by God his Father. (Philippians 2:5-11) And once again we hear in the Gospel that Mary’s blessedness belongs to all who “hear the word of God and keep it.” (Luke 11:27-28)

Thus, the feast of the Dormition of the Theotokos is the celebration of the fact that all men are “highly exalted” in the blessedness of the victorious Christ, and that this high exaltation has already been accomplished in Mary the Theotokos. The feast of the Dormition is the sign, the guarantee, and the celebration that Mary’s fate is, the destiny of all those of “low estate” whose souls magnify the Lord, whose spirits rejoice in God the Saviour, whose lives are totally dedicated to hearing and keeping the Word of God which is given to men in Mary’s child, the Saviour and Redeemer of the world.

Finally it must be stressed that, in all of the feasts of the Virgin Mother of God in the Church, the Orthodox Christians celebrate facts of their own lives in Christ and the Holy Spirit. What happens to Mary happens to all who imitate her holy life of humility, obedience, and love. With her all people will be “blessed” to be “more honorable than the cherubim and beyond compare more glorious than the seraphim” if they follow her example. All will have Christ born in them by the Holy Spirit. All will become temples of the living God. All will share in the eternal life of His Kingdom who live the life that Mary lived.

In this sense everything that is praised and glorified in Mary is a sign of what is offered to all persons in the life of the Church. It is for this reason that Mary, with the divine child Jesus within her, is call in the Orthodox Tradition the Image of the Church. For the assembly of the saved is those in whom Christ dwells.

It is the custom in some churches to bless flowers on the feast of the Dormition of the Holy Theotokos.

The Assumption in the Sacred Scriptures is primarily seen in Genesis 3:15 and in the writings of the Apostle to the Gentiles, St. Paul. In Genesis 3:15, Mary shares the same victory over sin and death as does Jesus due to their mutual enmity with Satan and sin. When the Bishops were asked about the Assumption being declared dogmatic many of them sent Genesis 3:15 to Pius XII as scriptural support for the dogma.

Other scriptural references for the Assumption are: Luke 1:28 because Mary is “full of grace.” Being that she is “full of grace” – the effects of sin would not taint her, which would be bodily death; Psalm 132:8 prophecies, “Arise, O Lord, out of your resting place: you and the ark which you have sanctified.” – Mary is the New Ark of the Covenant; 1 Corinthians 15:23 and Matthew 27:52-53 both give support to a potential bodily assumption; Revelation 11:19 and 12:1, Mary is the Ark of the Heavenly Jerusalem and she is the woman crowned and the woman assumed.

In Sacred Tradition, the earliest mention of the Assumption of Mary comes in a homily preached by Bishop Theoteknos of Livias, in Palestine around the latter part of the 6th century. He said since Mary was the Mother of God she held an exalted position; she was greater than all the saints. He emphasized heavily that the Son cannot forsake the Mother and that the Mother could never be separated from her Son.

Furthermore, we see clear references to the Assumption/Dormition of Mary in the writings of St. Gregory of Tours, St. John Damascene, St. Modestus of Jerusalem, St. Germanus of Constantinople, and St. Andrew of Crete during the 6th, 7th, and 8th centuries. In Egypt and Syria, there were liturgies on our Lady by the 5th and 6th centuries.  The earliest celebration of the feast in the West is dated in the mid 7th century. By the 13th century, the Assumption of Mary was accepted completely as a doctrinal teaching.

The Eastern Rites of the Catholic Church (and the Orthodox Churches) celebrate the “Dormitio” or Dormition. When time had come for the Theotokos to pass from this life to the next, the Apostles including St. Paul traveled, gathered, and briefly spent time with her. Thomas arrived three days after Mary had fallen asleep (a term we use when someone passes into death) and wanted to see her. When they went to the tomb where she was placed, they found that it was was empty. An angel of the Lord appeared to them saying that the Theotokos was assumed into Heaven.

Saint Basil the Great was born about the end of the year 329 in Caesarea of Cappadocia, to a family renowned for their learning and holiness. His parents' names were Basil and Emily. His mother Emily (commemorated July 19) and his grandmother Macrina (Jan. 14) are Saints of the Church, together with all his brothers and sisters: Macrina, his elder sister (July 19), Gregory of Nyssa (Jan. to), Peter of Sebastia (Jan. 9), and Naucratius. Basil studied in Constantnople under the sophist Libanius, then in Athens, where also he formed a friendship with the young Gregory, a fellow Cappadocian, later called "the Theologian." Through the good influence of his sister Macrina (see July 19), he chose to embrace the ascetical life, abandoning his worldly career. He visited the monks in Egypt, in Palestine, in Syria, and in Mesopotamia, and upon returning to Caesarea, he departed to a hermitage on the Iris River in Pontus, not far from Annesi, where his mother and his sister Macrina were already treading the path of the ascetical life; here he also wrote his ascetical homilies.

About the year 370, when the bishop of his country reposed, he was elected to succeed to his throne and was entrusted with the Church of Christ, which he tended for eight years, living in voluntary poverty and strict asceticism, having no other care than to defend holy Orthodoxy as a worthy successor of the Apostles. The Emperor Valens, and Modestus, the Eparch of the East, who were of one mind with the Arians, tried with threats of exile and of torments to bend the Saint to their own confession, because he was the bastion of Orthodoxy in all Cappadocia, and preserved it from heresy when Arianism was at its strongest. But he set all their malice at nought, and in his willingness to give himself up to every suffering for the sake of the Faith, showed himself to be a martyr by volition. Modestus, amazed at Basil's fearlessness in his presence, said that no one had ever so spoken to him. "Perhaps," answered the Saint, "you have never met a bishop before." The Emperor Valens himself was almost won over by Basil's dignity and wisdom. When Valens' son fell gravely sick, he asked Saint Basil to pray for him. The Saint promised that his son would be restated if Valens agreed to have him baptized by the Orthodox; Valens agreed, Basil prayed, and the son was restored. But afterwards the Emperor had him baptized by Arians, and the child died soon after. Later, Valens, persuaded by his counsellors, decided to send the Saint into exile because he would not accept the Arians into communion; but his pen broke when he was signing the edict of banishment. He tried a second time and a third, but the same thing happened, so that the Emperor was filled with dread, and tore up the document, and Basil was not banished. The truly great Basil, spent with extreme ascetical practices and continual labours, at the helm of the church, departed to the Lord on the 1st of January, in 379. at the age of forty-nine.

His writings are replete with wisdom and erudition, and rich are these gifts he set forth the doctrines concerning the mysteries both of the creation (see his Hexaemeron) and of the Holy Trinity (see On the Holy Spirit). Because of the majesty and keenness of his eloquence, he is honoured as "the revealer of heavenly things" and "the Great."